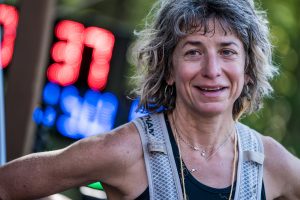 KL: First, congratulations on such a milestone run, your hundredth hundred mile race. That’s hard to wrap my head around. What got you started running these things? What was your first hundred?
SD: First, I love running. I’ve always run, except for a few unhappy years in college.  I saw an article about Western States 100 near the end of college, and knew immediately I had to do it. It was one of those lightning bolt moments. It took me almost 10 years of diversions but I finally made it to running ultras in 1996. That was great but I knew I wouldn’t consider myself a real ultrarunner in my heart of hearts until I’d run a 100-miler.

KL: What’s the draw today?
SD: A couple of things combined. First, I love the distance. I wasn’t outstanding at shorter distances in high school and always felt like the race was over before I’d even started to warm up. So, the distance suits me perfectly, Second, it’s hard in so many ways, physically, mentally, and spiritually, that it’s a true test. I lean toward the tough trail courses too. Finishing is never guaranteed and it’s up to me to make it happen. There are so few ways in everyday life—work, school, etc.—to put yourself up to a true, worthy challenge. I want to know who I am and what I’m capable of.

SD: I’m fascinated by your recovery between races. You run these often, but I’m not sure people will comprehend how often. For instance, you ran the Bigfoot 200 a couple weeks before Superior, and I think you are running another 100 as I write this two weeks after Superior. What helps you recover so quickly and helps you stay resilient against major injury?
KL: To start with, I don’t necessarily “race” every 100. It depends on my goals, the race, and how I’m feeling. That said, I’ve felt like pushing the pace closer to my upper comfort range a lot this year and last. Running has felt especially great for the past few years. Also, active recovery. I don’t sit around waiting for the stiffness and soreness to go away. There are things I can do to speed up the process and help my body recover. I take a rest day and get back to a run/walk, then running. I also do strength training and stretch regularly.

KL: Although you live in Tennessee, you’re also a part of the Minnesota or midwestern trail running community. You’re doing the Gnarly Bandit series this year. We enjoy having you around, but what’s the draw for you?
SD: It started because I love the country up there—it looks and feels like where I imagined I’d live when I was little. When I was running marathons, pre-ultra days, I ran Grandma’s marathon several times, so when I finally got into ultras, I looked around for a first 100 and saw Superior on the schedule at about the right time and far enough away that my friends in Tennessee wouldn’t notice if I didn’t finish. It was the natural choice. And once I got there to run…well, who can’t fall in love with that trail?  I still adore the place, but of course I’ve also grown to cherish my Minnesota family. I plan to keep returning as long as I can.

KL: What are some key things you’ve learned about yourself from running these?
SD: Ah…that would be a book. A thick one. The best way to sum it all up is that even after so many 100s, I’m continually surprised at what I’m capable of. We all underestimate ourselves far more than we even realize.

KL: What are some key points you’ve learned about how to run hundreds?
SD: Start slow, run your own race and do your own navigation are my favorites. They get ignored all the time. Sometimes I have to get reminded of them myself.

KL: Out of these 10,000 miles, which mile (or race) was your favorite and why?
SD: That’s a tough question because I get something out of every 100 I run, but there was this one year at Superior. It’s so hard to describe in words. It wasn’t my first time there, so I knew what to expect and I kept waiting for the discomfort and stiffness to set in…and it didn’t. The further I got into the last half of the race, the more it felt like I wasn’t doing the running. It was like something far larger than me was running me, or running through me. Far beyond a “runner’s high.” It was amazing.

KL: Which mile (or race) was your least favorite and why?
SD: Another tough question, because as I said, I get something valuable out of every 100 I run, and I also tend to forget the disagreeable parts. The best way to answer this is probably to say that I prefer rocky, root-filled trails with plenty of up and down, exactly like Superior, over flat, groomed trails like Umstead and Tunnel Hill. The “easy” ones are actually harder for me.

KL: What advice would you give to someone running Superior?
SD: Start slow and have some patience. You have plenty of time. Budget your energy. And for heaven’s sake, look around. You may only be there once, and you are definitely only there once on that particular day in those particular circumstances. The few seconds you spend on enjoying a view will be one of the most precious things you take from the experience.

KL: What’s something we should know about you that doesn’t have to do with running?
SD: I coach runners on the mindset side of endurance and life. That part of this sport and of life fascinate me. I’ve watched so many people, often people I care about, struggle, limit themselves, and box themselves in and have done the same myself. Working on my own mindset—which I’m continually doing—has changed my life in immeasurable ways for the better, and is a big part of my success with 100-milers. I want to help others do the same.